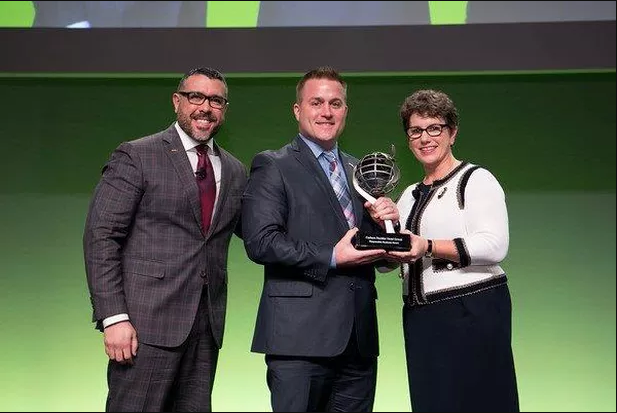 “It’s an honor to be recognized by Carlson Rezidor Hotel Group as the 2014 Responsible Business Award winner,” said Tim Rayman, general manager at Radisson Plaza Hotel & Suites. “This award showcases our company’s efforts to make a lasting impact on our team members that work for Greenleaf Hospitality Group, our local community, and the larger effort around the world.”

Rayman added that he is, “very proud of the efforts from the team to get out and volunteer in our local community, to be a strong mentor to KRESA students program, and collect and recycle the bars of soap and plastic bottles that are left behind when our guests depart. It’s a complete team effort and our team is passionate about their involvement.”

The Radisson Plaza Hotel was recognized for its philanthropic efforts such as the backpack program for its associates, mentoring program with KRESA students, volunteering with Ministry with Community and Kalamazoo Habitat for Humanity. Furthermore, the Radisson Plaza Hotel was ranked the number one contributor to Clean the World, a not-for-profit organization that recycles discarded soap and shampoo from hospitality companies and distributes it to impoverished people around the world. In 2014, the Radisson Plaza Hotel donated 618 pounds of used soaps and shampoos, distributing 2,358 bars of soap, recycling over 133 pounds of plastic, and providing over 352 plastic bottles to countries in need.

“We are delighted to recognize the Radisson Plaza Hotel & Suites Kalamazoo with this award for the amazing work they have done in their community and across so many different initiatives,” said Javier Rosenberg, chief operating officer, Carlson Rezidor Hotel Group, Americas. “As a company we pride ourselves on being a force for good and supporting in the communities we serve in, the Radisson Plaza Hotel & Suites Kalamazoo leads by example.”

In addition to an award, the Radisson Plaza Hotel was presented with a $5,000 check from the Worldwide Carlson Foundation to be donated to the Kalamazoo Valley Habitat for Humanity.

“Habitat works to end poverty housing and to empower our community to engage in itself through our mission,” said Don Jones, Kalamazoo Valley Habitat for Humanity executive director. “We are grateful for the volunteer service and corporate support of our Greenleaf Hospitality Group partners. This gift will help Habitat provide more housing solutions in our community.”